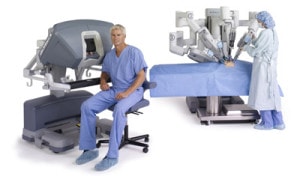 Up until recently, patients requiring surgical intervention had only 2 options: open surgery involving a large incision that usually left a scar or laparoscopy with a small incision. Thanks to recent technologies developments, there is a now a third, minimally invasive option: robotic surgery using the Da Vinci robot.

The Da Vinci Surgical System was originally developed by NASA to treat astronauts during missions. The goal of the project was to make it possible for surgeons on Earth to operate on someone aboard a space-craft orbiting the planet. The end product was named after the great Leonardo Da Vinci, who conducted groundbreaking anatomical studies in late 15th and early 16th centuries. It was approved for use in the USA in 2000.

The Da Vinci System is a new generation robot, which allows for surgical procedures to be performed through extremely small incisions. It is equipped with miniature manipulators and high-resolution cameras that transmit images to the human surgeon controlling it. At present, it is the only commercially available system that allows surgeons the same access as during an open surgery through incisions that are only between 1 and 2 cm long. It should be noted that the Da Vinci surgery is not automated. Every aspect of the procedure is controlled by the surgeon operating the robot, which can’t be programmed or make any decisions on its own. Every surgical maneuver is decided by the operating human surgeon.

The Da Vinci Robot is an ergonomic console used by the surgeon. It has 4 robotized arms, and is also equipped with high-resolution InSite® imaging system and patented EndoWrist® tools. During the robotic surgery the system scales the surgeon’s movements and moves the surgical instruments accordingly, in real time. The surgeon observes the operative field through the camera feed and performed the necessary manipulations. Two of the robot’s manipulator are equipped with tools and correspond to the surgeon’s right and left hands but with a wider range of motion; the third operates an endoscope and the fourth is used for additional tasks.

The increased range in motion makes it possible to use the system to operate in small spaces (such as the small pelvis, pericardium and mediastinum) and improves surgical outcomes. The InSite® imaging system is a 3D high-resolution endoscope. Additional imagining is provided by the Intuitive Surgical system, which includes 3 cameras with microchips. As a result, the surgeon receives a high-resolution three-dimensional feed of the area of surgery.

It can be used to treat the following conditions:

Patients facing cardiac surgery should also consider opting for the Da Vinci system. The risk of cardiac events during the first postoperative year for robotic surgery is significantly lower compared to traditional surgery. Additionally, robot-assisted surgery significantly shortens patients’ stay in ICU and reduces the likelihood of complications. It also negates the need for a sternotomy and allows cardiac surgeons to perform mitral valve reconstruction (rather than replacement).

The robotic system can also be used in case of proctologic diseases such as colon and rectal cancer, diverticulitis, inflammatory bowel diseases (ulcerative colitis and Crohn’s disease) and when colectomy (complete or partial colon resection and low anterior resection) is indicated. It reduces intraoperative blood loss and facilitates faster recovery of the bowels, allowing patients to resume regular diet sooner. The Da Vinci Robot is also used for bariatric surgeries, treatment of achalasia, and bladder and gynecological surgeries, and has revolutionized prostate cancer treatment.

Please find a partial list of robotic surgeries in which the Da Vinci system is used:

This revolutionary technology is available at Assuta Hospital one of Israel’s leading medical facilities. It is the last word in surgical practice, but that does not mean that its development has stopped. Future models of the Da Vinci Robot are already in planning, with the developers putting an emphasis on further reducing the size of the incisions needed for this type of robotic surgery and on making it possible for the surgeon to feel the resistance of tissues to further increase the accuracy of the procedures.