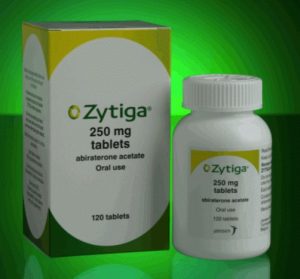 Abiraterone (Zytiga) is a breakthrough prostate cancer treatment drug, which has shown promise even in patients with extremely advanced disease. It has been approved by the FDA in 2011. The non-steroidal anti-tumour agent has decreased mortality rate by 35% and significantly increased the survival rate for patients with metastatic prostate cancer. The drug suppresses the cytochrome P17 enzyme, thus preventing the body from producing testosterone, which the tumour requires to grow. It has also been shown to relieve pain syndrome.

The therapy can be used in conjunction with Prednisone or Prednisolone, during chemotherapy or following its completion. Dosage is determined individually for each patient by his treating physician based on workup results. Treatment is overseen by a senior Israeli specialist.

It is manufactured in Germany and has all the necessary certificates.

While the therapy is not a panacea, it can significantly both improve the quality and prolong the lives of prostate cancer sufferers. It is one of the most powerful antineoplastic agents available, with shrinking of tumour reported in 80% of patients (including cases of metastatic carcinoma). Oncology experts consider its development a revolutionary breakthrough in the field of cancer research. It is effective against hormone-resistant, hormone-refractory and metastatic prostate cancers.

Even when dealing with resistant forms of prostate cancer, Israeli specialists look to not only prolong their patients’ lives, but to also make sure its quality remains sufficiently high. Zytiga is intended for patients with prostate cancer that had stopped responding to hormonal therapy. It can be administered prior to or following the completion of chemotherapy.

According to clinical studies, patients who received the Abiraterone in combination with another drug enjoyed both a longer nonprogression period and a longer survival period. In another study, the survival period of patients treated with Zytiga was double than among those who were undergoing chemotherapy.