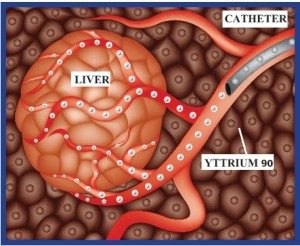 Selective internal radiation therapy is a revolutionary internal radiotherapy method for treating inoperable malignant liver tumours (primary or mets) in patients whose life expectancy does not exceed 3 months. The technique had been developed by Australian experts in the early 1980’s and approved for use in 2002. Over 30 thousand patients had received SIRT since. It is used in Israel since 2004.

As tumour cells require a large amount of blood in order to grow, they secrete various substances, which promote blood vessel growth. However, these new vessels differ from normal vessels. Additionally, it has been noted that liver tumours are often fed by vessels connecting to the hepatic artery, while the blood healthy cells receive predominantly comes from the portal vein. These characteristics have been taken into account during the development of SIRT.

How Does SIRT Work?

The treatment involves injecting tiny polymer beads called SIR-Spheres® containing yttrium-90 into the hepatic artery. The blood flow then carries them directly into the liver, where they attack malignant cells and the blood vessels feeding them without damaging adjacent healthy tissues. The technique allows hitting malignant cells with a radiation dosage that is 40 times higher than during “conventional” XRT. The procedure only takes about an hour. You will then be monitored for 24 hours before being discharged. Dosage is individual for each patient and determined according to tumour characteristics. The radioactive spheres are eliminated from the body naturally over the course of the two weeks following the treatment.

Multiple studies have shown that Selective internal radiation therapy is both efficient and safer than other treatments. It has even been observed to turn unresectable tumours into removable ones. In combination with chemotherapy SIRT has been shown to both prolong patients’ lives and improve their quality.

As mentioned above, it is most effective in cases of liver mets (for example from primary colon or breast cancer), and for liver cancers and cholangiocarcinomas with hepatic invasion when the tumours are inoperable. The technique has been found to be significantly less effective in treating other cancers (such as lung or bone carcinomas).