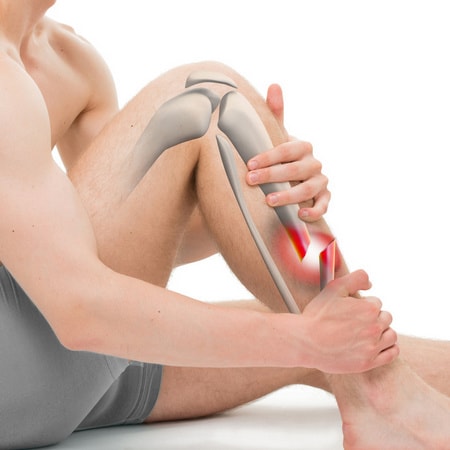 Yet another futuristic technology has become a reality in Israel: Lab-grown bone tissue was successfully implanted in a patient’s leg.

Up until now, patients who suffered disease or trauma-related bone loss disease required an autograft – a complicated procedure involving implantation of healthy osseous tissue harvested from another area in the body into the affected region that is associated with a significant risk of complications, pain and prolonged recovery times. Thanks to a ground-breaking surgery performed at Afula’s Ha-Emek Hospital in Israel in December 2017, a simpler treatment may soon become commonplace.

When Danny, a resident of Northern Israel, broke his leg in a car accident, he never imagined he would become the first person in the world to undergo the innovative procedure. After doctors were forced to remove a 5-cm chunk of bone from his calf, they harvested his adipose tissue, grew it in a laboratory and injected it back into his body so it could restore the missing bone. He is expected to be able to walk again within 2 months.

The treatment was made possible thanks to a technology invented several years ago by an Israeli company called Bonus BioGroup. It involves extracting cells capable of growing bone and blood vessels from adipose tissue, and maturing them inside a special bioreactor that mimics conditions inside the human body and provides optimal conditions for bone proliferation.

It only takes about two weeks for the lab-grown bone to be ready for implantation, and several months for the defect in the patient’s body to heal up. ‘It feels like science fiction,’ admitted Bonus BioGroup’s CEO Shai Meretzki, ‘we created thousands of tiny living bone fragments and injected them into the area of the defect. They then attached themselves to the remaining bone facilitating regeneration of the missing tissue.’

The technology can be beneficial not just in cases of injury or cancer, but also improve the lives of patients suffering from osteoporosis. Additionally, according to Prof Nimrod Rozen, who performed the aforementioned operation, it can also assist people who want to increase their height thus becoming an easier alternative to today’s method-of-choice for limb lengthening.