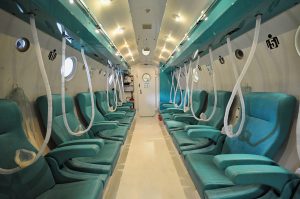 Hyperbaric oxygen therapy is a non-invasive treatment which involves inhaling pure oxygen (as opposed to 21% oxygen in the air we usually breathe). HBOT takes place inside a specialized hyperbaric chamber and is considered to be an efficient method to treating a wide variety of issues including decompression sickness, non-healing diabetic/vascular wounds, osseous tissue infections, abscesses and burns. It can also be used in post-stroke rehabilitation.

During a hyperbaric treatment oxygen is dissolved not only into the red blood cells, but also into the plasma as well as the lymph and the CNS fluids. Thus it can reach areas where circulation has been impaired. The increase in blood oxygen levels assists the patient's body to reduce swelling, kill bacteria and grow new blood vessels and helps wound heal faster.

The Center for Hyperbaric Medicine in Israel

The Sagol Center for Hyperbaric Medicine and Research at Assaf HaRoffe houses one of the largest hyperbaric chambers in the world, capable of treating over 120 patients per day. It also conducts advanced research in the field of hyperbaric oxygen therapy, such as potential applications for brain rejuvenation in patients with certain neurological illnesses.

Hyperbaric chamber cost depends on the number of sessions required, which will be determined by your treating hyperbaric specialist. Most patients have between 30 to 60 sessions (performed daily with breaks during the weekends).

Most patients referred for HBOT fall into one of the following 3 groups: